I wouldn’t necessarily say that I am the Anti-Bride… but I kinda feel like I’m not as giddy about the whole being-a-bride thing.

A few points to ponder as we close in on our departure from Seoul:

1. My soon-to-be sister-in-law (wow, way too many hyphens there) sent me THREE bride/wedding mags. There are well over a thousand dresses in them. I liked four. Maybe five, and three of those are for my bride’s maids. The fiancée says it’s because I am picky. That may well be true, but still… hello?! Where are my girly genes?

2. My aunt is helping plan our honeymoon. And it’s going to be an amazing and romantic one. But, I’ve missed two online “appointments” with her to really hash out the details. Granted, the honeymoon is about a year away, but still. . .

3. I’m all over the green and purple motif, but I still have no real clue what it will include. I even build an inspiration board on Etsy. Seriously, too many options don’t help me. Lovely to look at though.

4. Finally, that whole Royal Wedding business. My mom  in Albuquerque got up at 2am to watch, and I really thought it had been on Tuesday (until I found out otherwise on Thursday). So, last night, my adorable mother and I skyped about the wedding. I didn’t even watch the ceremony because I was fiddling with etsy. I eventually tuned in onBBC and found the processional a bit anticlimactic. I wasn’t gaga over Catherine’s (Duchess of Cambridge) dress. I mean, it’s lovely and wedding-y…but meh. Even my fiancée was impressed with the carriages and regalia, not me…not so much.

Anyhow, this all kinda makes me sad.

When I moved out to Seoul in the summer of 2009, I knew what I was leaving behind. I was leaving my family and friends who happen to be the most valuable and important people in my life. I was leaving my car (don’t judge me, it’s a Ford) and the roads of my high desert home for the public transportation dominated streets and rails of the “land of morning calm” (sounds kinda like a coffee ad). I was also leaving behind my two cats, Millie and Lillith, and my two dogs, Copper and Nikki.

You all already know (or if not, you will know by the time you finish this sentence) that Jason and I just sent our two Siamese boys back home. They just turned a year old on the 9th, and have been gone for almost a month. 3.5 months without them will be…quiet, to say the least.

This morning, I got an email from my mom (I got three actually, but one of them inspired this post) about my oldest cat, Millie.

Millie is my baby. I’ve had her since she was a kitten. She’s just over 10 years old. 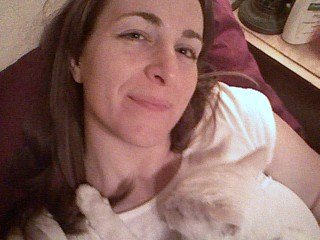 For a few weeks, in 2000, I worked at a local vet. My job was to clean cages and feed animals. Far from glamorous. The vet was holding two kittens, both had been abandoned by their owners. Because of their age, the two were put into the same cage. One was all white (but for a few black hairs on the forehead) and the other was an orange tiger. Obviously, the white one was Millie. The orange one, the most friendly lil’ guy, was Stanley. I adopted them both.

To save time, I won’t go too much into the details. Stanley had been severely injured by his previous owner’s young child, so he only had the use of his two front legs. One of his hind legs had been amputated, and the other (because of nerve damage) was useless. Regardless of this, he had an amazing spirit and LOVED to be held. Unfortunately, several months after getting them home, Stanley took a turn for the worse, and I had to say goodbye to him.

And she is waiting patiently, apparently in my bedroom window, for my return.

I needed to vent a little energy this morning. Instead of plopping in front of the TV and eating peanuts like popcorn, I painted.

Last year, I was into painting. I bought a set of acrylic paint, water colors (and water-color paper), and a few randomly sized canvases. I posted most of the other paintings I did a while ago on my other blog.

Today, I felt the need to really visualize the color palette I am looking to have. And I came up with the painting below.

It’s a mix of purples and a hint of green which I’m thinking looks about right for my scheme.

It’s also really hard not being home so I can go shopping, settle on my favors and decor, play dress up, and take my ABQ ladies for tea.

When I created our wedding website I wanted to include some gift registries at stores I liked. How fun is it to surf the Internet, pick out cool things like bread makers, dinnerware (service for eight), and bath towels? It’s A LOT of fun. Especially because we don’t have to pay for most of it, our wonderful friends and family do. Call me crazy, but I like presents.

So, I signed us up at two stores–Target and William-Sonoma.

Unfortunately, Jason came across a bit of news that we both found rather upsetting. Apparently, Target donated over $100,000 to a Minnesota Gubernatorial candidate. That’s all well and good, but he (Tom Emmer) was running on a STRONG anti-gay platform. Fortunately this guy lost the race, but the damage to Target was longer lasting.

Last month, Lady Gaga (who I can honestly say I feel very neutral toward in general) pulled her deal with the company. What is even MORE newsworthy, is that Target was actually given a score of 100 (out of a possible 100) by the Human Rights Campaign (HRC) prior to the company’s donation. The score reflects the company’s approval rating for their treatment of LGBT employees.

What does this mean for Jason and I? It means that we wrote a letter to Target. In the letter we let them know that we felt uncomfortable having a registry with a company who supported inequality at the level Tom Emmer does. We asked them to delete our registry account (since there is no apparent way of doing so by a user). I also pulled the link from our wedding website.

Today I did a little research into William-Sonoma. They have not responded to the HRC’s request to be polled. So, while they may be, in reality, a wonderful employer for LGBT employees, we’re not privy to that information at this time. I haven’t pulled their link yet, we’re still registered there, because we’re giving them the benefit of the doubt. The company is a well-documented supporter of human rights.

For our part, we ask that our friends and family buy gifts from local, Mom and Pop, businesses. We’re not expecting everyone to rush out to the local farmers markets. Just, be aware of who you’re giving your money to. After all, it really is the thought that counts.

It’s officially 365 days until our nuptials, and my head is not quite spinning, yet. After today, we get to say that our wedding is less than a year away.

As I contemplated what I would write about on this very exciting (for me, anyway) day, I found that I haven’t really done a lot in the way of thinking about the more intricate details. Sure, I have skimmed through the “pages” of online wedding paraphernalia like the knot and wedding bee, but even as I shared my inspiration boards with you all last time, I didn’t necessarily feel committed to any one thing on those pages.

Accept the colors, those are already well established. Purple is MY color, and it goes well with green (unless it’s October, in which case purple also goes well with orange…but the wedding is in April, so green it is). And, our wedding cake toppers… which are the BOMB (still not sharing that one… it’s a surprise!). Oh, and Jason insists on a keg. Anyway.

Today I thought a long time about what my style is…actually. I’m pretty much Plain Jane, a jeans and a T-shirt kinda girl. But, when I think about style and sophistication, I think of Audrey Hepburn(naturally, and who wouldn’t?). So, I’ve decided that I want Audrey hair for my wedding day.

I figured this image of Audrey Hepburn was a little more chic than what she is more iconically known for (Holly Golightly), and it would be a lovely style for the flowers I want in my hair.

Speaking of the flowers, these are violets. They are the flower of February birthdays. This works well for us, as Jason happens to have been born in February. The flower for December (my birth month) is the narcissus. Lovely as it is, it makes me think of the movie “Black Narcissus” whose plot line isn’t really in the same vein as my wedding. Great movie though.
So, with still a year to plan (and move 6,000+ miles back home) I am resting happily assured that at least my hair will look amazing and classic.