A fun place we visit occasionally is a “you-paint” pottery store called Kiln It.

Summer before last, we were introduced to this type of store. For a flat rate, we could select a piece of pottery, paint it any way we wanted, leave for the proprietor to fire in a kiln, and pick it up within a week. Tucker and I were invited to a play date at a place out in Rio Rancho.

Tucker painted a cool race car, and I made some personalized presents for the grandparents. 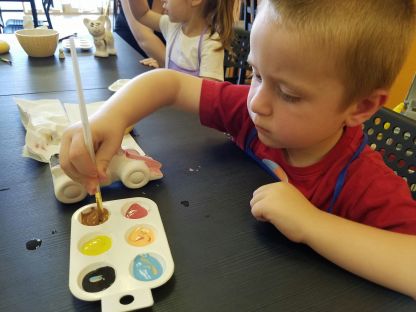 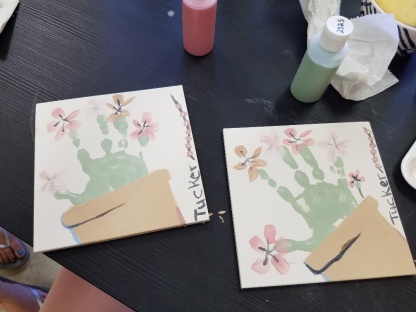 Fast forward to that November, the day before Thanksgiving Break. Jason, Tucker, and I were wanting to go back to the place in Rio Rancho, but they were having some sort of craft fair. Undeterred, we went in search of “the other place” I had heard about from a friend. We were not disappointed.

A family-run operation, Kiln It had a cool studio vibe, and tons of figures to choose from. We decided to paint a family of turkeys. Then I followed them on Facebook.

One of the things I really like about the studio is their regular story times. One of the owners is also an area teacher, so she does a great job reading with the kiddos. We’ve done a few of these over the last year or so. Our first story time was “Giraffes Can’t Dance.” Tucker made a very red (his favorite color) giraffe. With some help. 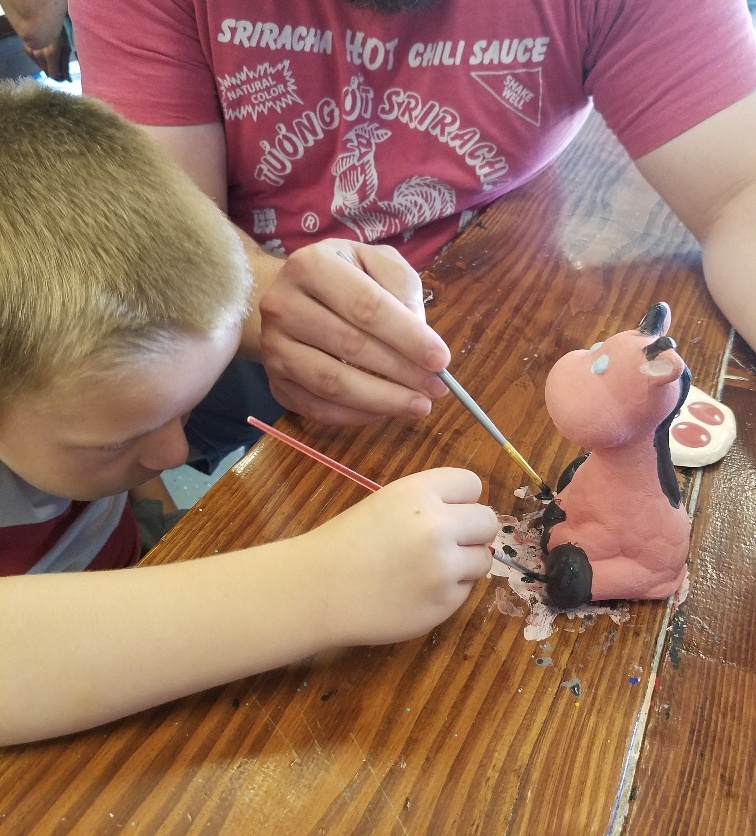 Our second story time was “Pete the Cat Saves Christmas.” We turned this into another opportunity to make it family day. In addition to Tucker’s Santa, we painted an ornament for each of us. Well, Tucker painted Santa, and I painted Tucker’s ornament to look like the Grinch per his request and assistance. I also make the snowman and Jason made the snowflakes. After firing, they turned out even cooler!

The most recent story time was for “Dragons Love Tacos 2” at which we painted a cute little dragon. I say “we” because it really is a joint effort. The figures need three good layers of paint in order to really turn out well. Tucker doesn’t quite have the technique down, so we help him out here and there.

Kiln It hosts all sorts of events, from these story times, to various paint technique clinics, as well as themes around local breweries, just to name a few. We HIGHLY recommend a visit.

What is you creative outlet? 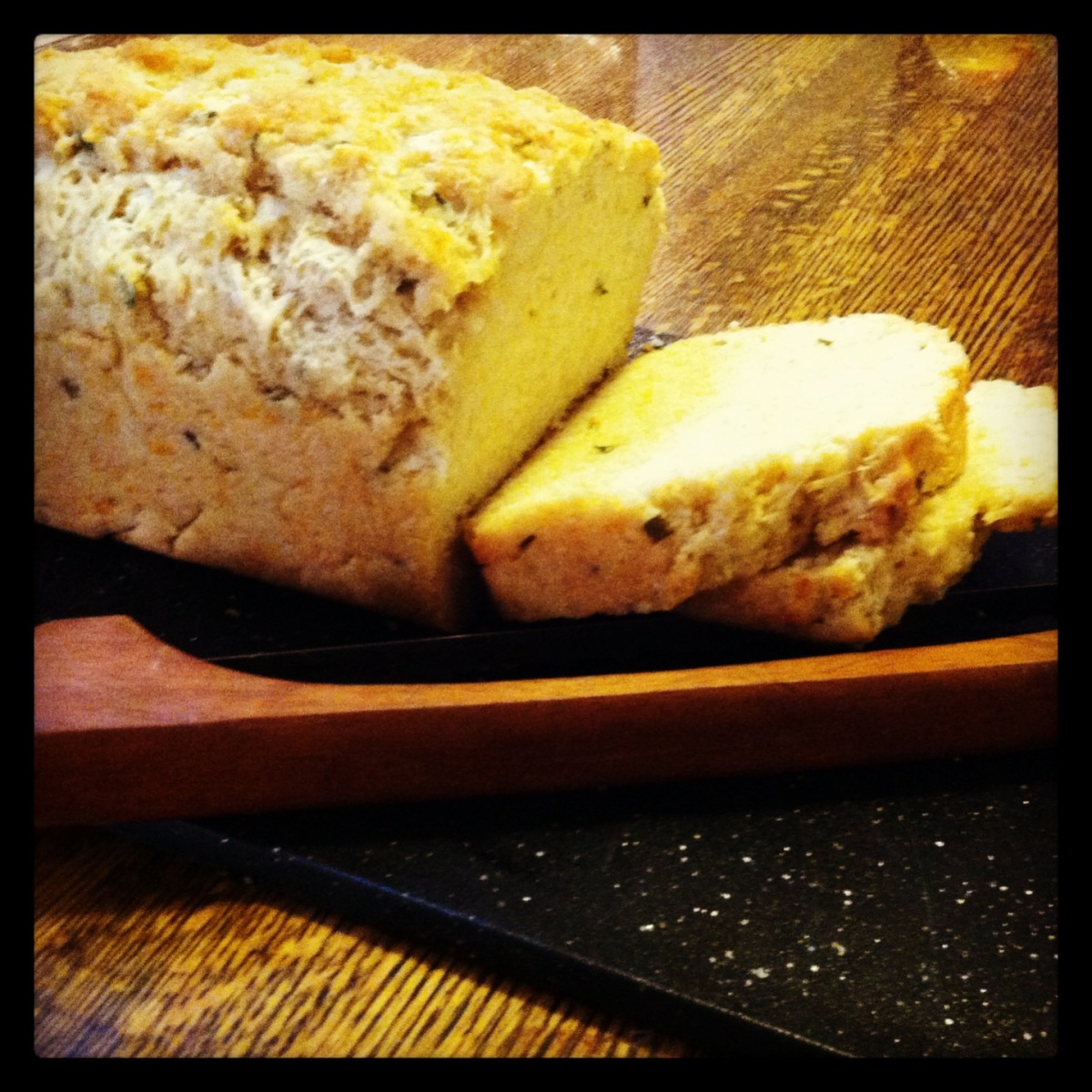 I am not a beer drinker. In fact, from the very first time I tried beer (at the tender and illegal age of four), I’ve found it to be rather gross. The smell, the taste, the after-taste all make my taste buds want to run for the hills; or at least that part of my tongue that doesn’t detect bitterness. If all my buds could gather at the side where salty, sweet, or even sour thrives, my beer-drinking experiences would be a lot more tolerable.

I really would rather be one of the cool kids who likes, even loves beer. My life would be so much more… chill. Oh well.

One thing that I do like beef for: baking. What did I bake, you ask?

When I was in Korea, I made Jason and myself a yum bread I found… somewhere. Unfortunately, I have NO idea where I got the recipe. I have it written on a scrap of paper that I managed to save. When I made it in Korea, I made plain ol’ white bread, and I used a light beer (more palatable).

Now that Jason’s taken up blogging, there is a steady supply of beer of all colors in our pantry and fridge.

Another thing I did while living is Seoul was scour the YouTube cooking channels. We discovered this lovely Kentucky-based woman sometime in 2010. She recently did a beer bread which incorporated one of my favorite foods–cheese. Her recipe also calls for a good amount of chives.

I made this recipe for the first time with a bottle of Jason’s Shiner Blonde, as well as extra sharp cheddar.

Add all the dry ingredients in a large mixing bowl until well-combined. I added a small amount of the flour to the cheese before mixing it in to coat it. This helps distribute the cheese more evenly. Then pour in the beer. Mix until doughy. Pour dough onto floured surface to knead first (if your dough turns out dryer) or directly onto a baking sheet to free-form, or into a bread pan (if your dough is wetter).*

*I’ve played around with this: Cold beer is better than warm beer. 3 cups of flour is better than 3.5 (I actually think the 1/2 cup was for sprinkling and kneading, but I never transferred the directions… my bad!)

Betty’s bread dough was wetter than mine, and she uses a bread pan. I have used both a pan and free-formed the dough. Both are yum.

The egg is for glazing; brush it on prior to baking. Betty uses melted butter on hers; about ten minutes before finishing. AWESOME.

Adding the cheese and chives took the bread to such an amazingly savory place. Jason, my folks, and I polished off this loaf in a single night. It was THAT good.

Last week we totally spaced picking up our share at Jesse’s CSA. Usually, we’re scheduled to pick up on the odd weeks (as set by him from the first week). On Saturday, Jason and I went downtown to the farmer’s market and made a point of stopping by Jesse’s kiosk. He said we could pick up our share this week. Now, we’re set up to pick up on the even days.

Making their debut this week were the peaches. These are pretty small little guys, about the size of golf balls. But that’s the price you pay for organic. I accept this price.

And, since it’s WIAW, and I already had most of a batch of scones ready to go (I just needed to add the butter and milk), I wanted to try out this idea from another blogger I follow. 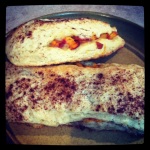 You can find my plain scone recipe here.

I needed to vent a little energy this morning. Instead of plopping in front of the TV and eating peanuts like popcorn, I painted.

Last year, I was into painting. I bought a set of acrylic paint, water colors (and water-color paper), and a few randomly sized canvases. I posted most of the other paintings I did a while ago on my other blog.

Today, I felt the need to really visualize the color palette I am looking to have. And I came up with the painting below.

It’s a mix of purples and a hint of green which I’m thinking looks about right for my scheme.

It’s also really hard not being home so I can go shopping, settle on my favors and decor, play dress up, and take my ABQ ladies for tea.

As a follow-up to my post from last week on turning my Jeju oranges into jam, I would like to offer up this short blog about another jam recipe I found on WikiHow. It has been a yummy alternative to banana bread when you spread it over warm toast. The recipe doesn’t mention the shelf life, so I would suggest not letting it go too long. Bananas are fickle and while semi preserved in the cup of sugar melted down at the beginning, the bananas themselves may not last very long. But, if you find it as delicious as we did, it really wont last very long.