I’ve lived in Albuquerque for just over 30 years. When I drive around my city, I can reflect on the parts that bring me the fondest memories. And now that I have a child of my own, I am able to share some of those places and memories with him.

There’s a park near the mall on the East side of town where my grandfather used to take me. My mom has albums full of memories, many of which were made at this park. When I was a girl, there was a sort of monkey bars sculpted into the shape of a giraffe. I hadn’t really thought about that park in years. My grandfather passed away when I was eight, and I had no reason to visit the park afterward since I lived in another part of the city. Last spring, almost exactly a year ago, Tucker was invited to a friend’s party and it just so happened to be at that very park.

Of course I have passed by this park, now and again, through the years. I noted at some point the giraffe seemed to have been removed or relocated. I never stopped to look until the day of that party.

It was there. Tucked back in the corner of the park, off the main road. Set aside like some monument to my childhood. Before joining the party, I let Tucker climb that giraffe. 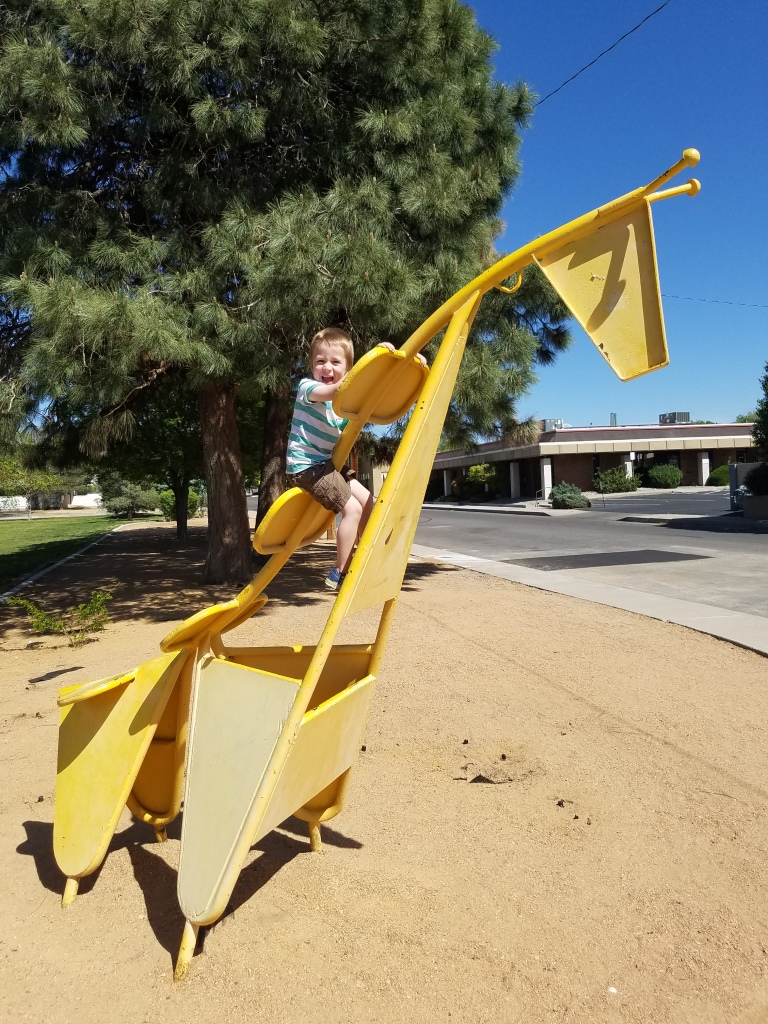 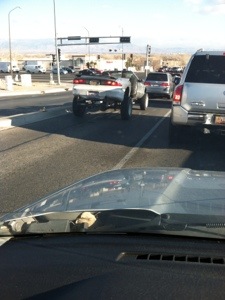 Last weekend, I had the chance to participate in a very cool event.

In today’s economy, it’s often hard to scrape together a few bucks to help out a fellow community member. Often, small businesses are at the mercy of their larger, corporate counterparts. A lot of times, small businesses fail because they cannot compete with places like Walmart.

While we were still in Korea, just days before leaving to return home, I saw a video about a cash mob.

If you are familiar with a flash mob, during which seemingly random groups of people burst into song or dance at a prescribed time and place, a cash mob is similar.

As with a regular flash mob, a cash mob is assimilated via social networking sites. And while the purpose of flash mobs are to have fun and entertain, a cash mob has a different purpose: to come to the aid of locally owned small businesses.

I had the opportunity to participate in a recent cash mob hosted by an organization called Albuquerque Cash Mob. They’ve mobbed 14 Albuquerque-area proprietors to date.

I really think this is just a great way for people to give back to their community in a fun way. We meet at a locally owned restaurant, then shop. It’s a double win.

I hope to do more of these sorts of events. To this one, I brought Jason and our friend Jamie. We found ourselves in Albuquerque’s south valley at an antique mall-type place. Very neat stuff there!

I’ll have to post our haul pics in a separate post, but we picked up some cool stuff (for us).

So we have a house! we closed on the 8th and got our keys on the 9th. It really is a lot of house for two people and four cats. Or perhaps it just seems that way because we’ve got 1/3 the furniture needed to fill this place. I will post more pictures very soon. We are still in the process of moving over a lot of our stuff (including TWO vehicles) from various locations about Albuquerque.

Aside from our very strong desire to fill up this house with furnishing, we are still in the middle of paying for and planning the wedding. So, until we pay off the wedding (ie HAVE the wedding), we’re gonna be a little house-poor. But, we think the sacrifices are worth it. We are super excited to have this wedding!

Here is our new place:

Things are starting to really fall into place for us as we get closer and closer to our TOD (time of departure).

First of all, our baby kittens have reached Albuquerque. They are spending the night with my aunt, uncle, cousins, three cat cousins, and three dog cousins before reaching their final destination at my parents’ home. There they will be greeted even more animal siblings. They weathered a journey west from Korea (over two and a half continents!) to Denver via cargo plane, then a 7+ hour drive from Denver to Albuquerque. Kudos to our very well-adjusted boys, for not only did they ride separated (first time they have been apart in their entire 11 months) on the planes (plane change in Frankfurt, Germany), they met a myriad of new animals along the way. Still, they come away unscathed. This makes for two very proud and happy pet owners.

Getting Abner and Ebenezer back to the states was probably our biggest concern. We can go ahead and cross that off our list.

Yesterday I managed to find two very inexpensive airline tickets for Jason and me to Los Angeles. Air China departing from Seoul on July 30th, short hop to Beijing, then on to LA. Because LA is about 16 hours behind Seoul, we land ten minutes after we depart. In the general scheme of things, I think this idea of gaining a whole day is pretty awesome. We are probably going to crash at a Marriott that night, because … after 16 hours of travel, we’ll be jet lagged, and Jason doesn’t want us to end up burned to death in a heaping wreck of a rental car. I still have to make our reservations, but I plan on doing that next month (one major expenditure at a time, please).

I also (because I am super awesome) managed to secure a rental car for our drive from LA to Albuquerque. Now, a quick note… the reason we’re driving from LA is (well, there are two reasons) 1. it’s cheaper to land in LA, rent a car for two days and drive that it is to fly to ABQ by about $400. and 2. after spending 12 hours on a plane, 2 hours in china, 2 hours on the plane before that, we won’t really be in the mood for getting accosted by the security check points between terminals. Thanks, but no thanks.

We need to begin shipping things home; this includes various art, clothes, shoes, small furniture (like an Asian table that folds smaller and the parts to a cat scratching post), and a few minor things. We need to buy two bike bags so we can get our bikes onto the plane as checked luggage. We need to find homes for all our furniture (a couch, a bed, shelves, armoires, dressers, coffee table, vanity…), electronics (oven, coffee maker, TV, alarm clocks, hair equipment, computer monitors, etc.), and a variety of housewares and spices. We plan on having various foreigner co-workers take what they want. I say foreigner because usually the Koreans don’t do “second-hand.”

Then we go. We will have to buy a pre-paid cell phone in LA as well, but that shouldn’t be too difficult to find. We’re also making our stopping point on driving  day 1 be Las Vegas so we can visit a friend who’s offered to feed us… can’t say no to that!

I think we’re well on our way to getting things wrapped up out here in Seoul.

As the countdown to departure for Jason and I continues, Abner and Ebenezer will be making their trip home sooner. Temperatures in Albuquerque are getting warmer, and that means airlines are less and less willing to accept pets (or any animal I would imagine) on their flights. In fact, United, which is the airline we’re hoping to have fly our babies home, won’t accept them if the departure or arrival destinations are 75°F or above.

If you’re in a more temperate location, that’s fine, it’s February and no big deal, right? Well, we’re not from a temperate location, we’re from the desert, and that means that 75°F comes early and it comes fast. Like April. SO, to avoid all that drama, we’re shipping them home sooner.

Months and months ago we started looking for information on shipping the boys home. After adopting them nine months ago, we knew what we were getting into.

At first, we looked at the airlines, and it was ridiculously difficult to decipher what the real rules were. On top of that, try finding the right crate for the cats in a foreign country. Not so easy. We had to find other means of transport. Aside from the boys, we also have to ship home three bikes, some art, clothes, two computers, and our collection of coffee mugs. We decided against shipping our furniture and will be trying to off load all that and our wired for Korea electronics.

After some research, we finally found an impressive international organization with the only function being the shipping of pets. This organization puts the pet owner in contact with a myriad of companies who have years of experience in the organizing of pet shipment. The companies are endorsed by this organization, which also means the companies are good. The company we’re going with is Pet Airline, so far, they have been infinitely helpful. Since they are here in Korea, they are able to even help us talk to our vet to get the boys their Rabies Certificates. We pick them up on Saturday.

So, once that is taken care of, I think we will be saying “see you soon” to our boys. They will be met by my wonderful aunt and promptly taken home where the rest of our menagerie awaits.