It’s been nearly a year since I’ve done one of these. But I have been telling Jason for a good long time that I want to start up again. Once a week of photographing my meals or super awesome eats isn’t too hard at all.

I’ve been eating pretty well these last few days, especially since my dad arrived last Thursday evening. He had a lot of food restrictions such as: no beef, no pork, no spice. As well as some strict food preferences: milk, eggs (not fried), canned fish (not fresh). So our plans for steak and carne adovada were squelched. And, because my dad wanted to get out and see stuff, I was able to get out of the house and move a lot more than I was prior to this past weekend.

The weekend was packed with a half-day trip up to the peak, my cousin’s bat mitzvah and subsequent reception, looking at 50+ years worth of family photos from my dad’s side and which I’d never seen before, and a jaunt in the petroglyphs. With all the being away from home time, I was forced to carry healthy snacks like almonds, carrots, and string cheese. And LOTS of water. I was able to better space out my meals and snacks in such a way that ever since, I’ve been keeping my energy up and staying well hydrated. I’m actually quite happy with myself.

Up to this point, I was eating pretty haphazardly. And not eating stuff that was the best nutritionally. I’m feeling good. I guess we’ll see how my OB appointment goes tomorrow.

Breakfast of instant (sorry all you die-hard real oatmeal fans, I needed an alternative today) oatmeal and fresh pineapple.

Lunch of left-over chicken and pasta bake and matzoh spread with Laughing Cow Light Swiss infused with garlic powder from our CSA crop share this week. The pasta dish was one of the things I made while my dad was here. He pretty much just ate the chicken. The pasta is spinach and tomato rotini with a nice marinara sauce thickened with low-fat cream cheese. The chicken was pan seared before I put it all together and baked. 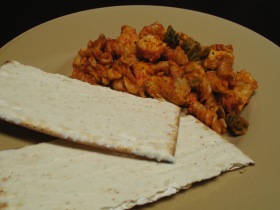 Dinner of carne adovada. Since we weren’t able to cook this for my dad, we made it today! (Sorry for the recycled pic, today’s batch is still a’ cookin’)

**Question: What did you eat today?**

For those of you who know me, know that veggies aren’t really my thing. I’m not a big fan. But, as I am preggers and want to be sure the little chicken is getting all s/he needs nutritionally, I have to eat those veggies I tend to avoid.

Over the last few days, Jason and I have been scouring cookbooks, looking for veggie-rich or full-on vegetarian recipes. The prompt for this was Jason viewing a graphically horrifying video on YouTube about the poor treatment of pigs in slaughter houses. This, added to the affore mentioned baby-essential nutritional value of veggies, led to our experimenting with dinner tonight.

Years ago, even before I moved to Korea, I bought Jessica Seinfeld’s cookbook “Deceptively Delicious.” I had never used it before this evening.

Now, I didn’t actually use a recipe from the book, but I did use her puree techniques for two of the veggies I added to our pasta dish.

The purees I made were spinach and zucchini. To prep them for puree, I first steamed about 3.5 cups of baby spinach in a pan with about a tablespoon of water for just under two minutes (until wilted). Then, I put the wilted spinach into the blender. I cut up the zucchini into 1-inch chunks and set them to steam in a make-shift veggie steamer we made with part of our busted rice cooker and a big pot we received as part of a house-warming gift. The zucchini steamed for about 7 minutes. I put the zucchini into the blender with the spinach and set it to puree for roughly 2 minutes. The mixture should be creamy and smooth.

In a pan over medium-low heat, combine 4-5 tablespoons of tomato paste and about a half cup of water. Mix until the water has been fully absorbed into the paste and the constancy is creamy. Pour in a can of stewed sliced (or diced) tomatoes with liquid. Combine.

Season with 1 tbsp basil, 1 tbsp oregano, 2 tsp crushed pepper, and 1 tsp cayenne pepper. Originally, I added a dash of both onion and garlic salt, but adding a 1/4 to 1/2 an onion (include in the blender with the spinach and zucchini to puree) and 1-2 cloves of garlic (minced) will bring out a better flavor.

Pour the spinach-zucchini (and onion) puree into the tomato mixture and stir until well-combined. Don’t freak out when the mixture turns to a reddish-brown color.

I used the multicolored rotini–spinach, carrot, and plain flavored. I cooked it in a large pot of well-salted boiling water. After adding the noodles, I turned the heat down from high to medium and allowed the noodles to cook for about ten minutes or until the taste test confirmed readiness.

Finally, I added the noodles to the sauce and mixed the two together. Jason had requested that I include some chunks of zucchini, so I left out three from the puree and cut them smaller and added them at the end.

We made enough for four, and had two servings left over at the end. So tasty, and I even ingested more veggies than I’ve had in the last three days combined. This method of cooking, however “unoriginal,” is such a great way for ME to get my veggies.

In addition to our super pasta, Jason roasted us each two ears of corn. Hooray for nutrient-rich dinner!

**Question: How do you get YOUR veggies?**